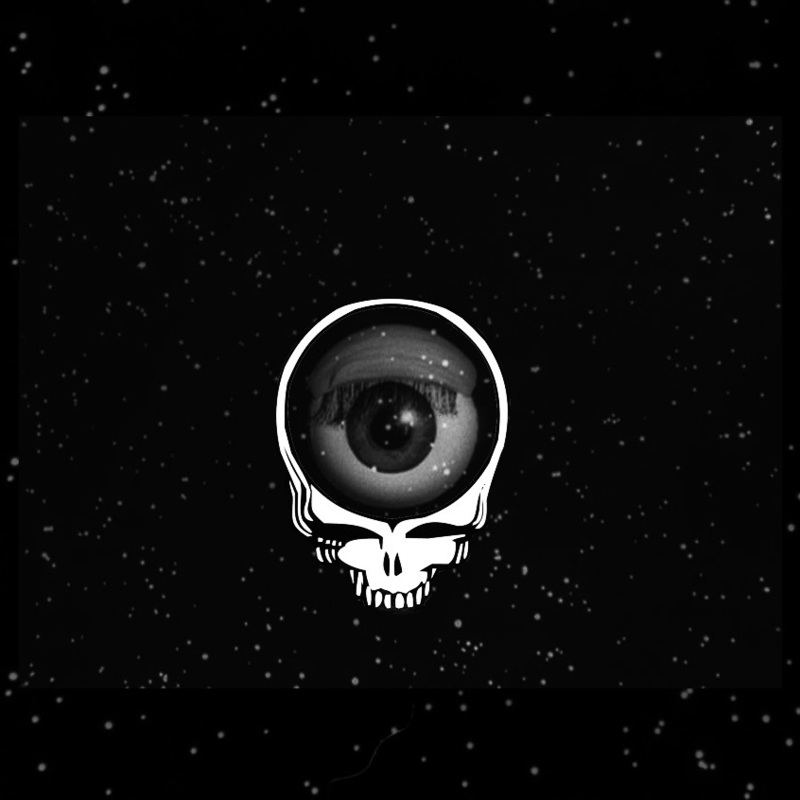 It is a dimension as vast as space and as timeless as infinity. It is the middle ground between light and shadow, between science and superstition. This is the dimension we call the Grateful Dead.

Imagine if you will, 30 minutes of 1985 Grateful Dead music related to “The Twilight Zone” theme and mood.

With the help of middle-man Merl Saunders, the Dead were hired to create theme and incidental music for the 1985 reboot of “The Twilight Zone.” A soundtrack album was released containing a combination of ominous Dead “space” and cheesier, ‘80s pop moves.

This mp3 mix includes all the “space” passages, plus an edit of studio outtakes, plus three live passages. No cheesy stuff.

“Merl says that the night he sat in during the ‘space’ jam at one of the recent Berkeley shows, ‘we did a bit of the Zone without the theme. It was kind of loose. We’d been in the studio working things about a week, and then all of a sudden I was just up there onstage!’” (Golden Road #6)

According to Garcia, the band recorded enough bits to construct a much larger Twilight Zone space.

“… but what we got [to do] was a collection of little musical inserts called stings and bumpers – you know, little hunks of non-specific music of various lengths that have different moods. One might be a mood like, ‘Don’t open the door,’ or ‘Don’t go up into the attic.’ Or, ‘I’m going to work work, honey. Are you sure you’ll be OK home alone?’ They go all the way from a sort of noncommittal [he makes light, almost playful guitar sounds] to a real ominous ‘Braaaaaagh!” They gave us a huge menu of those – 40 that are like 5 seconds, 20 that are 6.5 seconds, a bunch that they can fade in and out. Then it’s the music editor who actually fits them into the show.” (Golden Road #6)

My assumption is that the 17 minutes from the official soundtrack included on this mix are made up of a slew of these tiny pieces of mood music, edited together.

The session/demo edit comes from this set of fragments. I found that several of them contain the exact same, main passage (w/some different treatments), so my edit comprises the non-repeating passages.